The National Capital Region Squad (NCR-SQD) is a group of people who live in Virginia, DC, and Maryland, love America, and respect those who have served in our nation’s armed forces. We do endurance events, such as the GORUCK Tough Challenge, to raise funds for veterans organizations that serve the needs of our service men, women, and their families.

To date, the NCR-SQD has raised more than $120,000 for these deserving organizations.

GORUCK builds the best rucks and gear, all made in the USA, and they like to prove that standard by organizing team-based endurance events that are led by current and former special forces operators.  The job of these combat veterans, the GORUCK cadre, is to “test your limits, push you beyond them, and build your class into team.”

And, that’s where NCR-SQD started….March 2014, GORUCK Tough Class 933.  It was the most physically difficult challenge any of us had ever undertaken; but, the character that was revealed, and built, was so rewarding that we knew we had recruit some friends to share in the experience.

Four years and as many GORUCK Tough patches earned, and we’ve had the true honor to work with some great veterans organizations, as well as a the special forces operators who serve as the cadre, and run the GORUCK endurance events.

We like history, and there’s no better place for it than the Washington, DC area, so we build our GORUCK Toughs around historic locations and themes.  From the hallowed ground of Bull to Run and Gettysburg to the woods of Quantico, VA where the OSS trained during World War II, it has been a different challenge, with new lessons learned, every year.

This year will bring a new challenge and new team members, and, most importantly, another chance to give a little bit back to the men and women who fight to keep our country safe.  That’s our definition of good livin’…….you should grab your ruck and come join us. 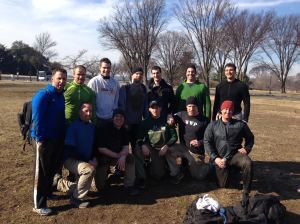 View all posts by Dirk